These bars kind of mark the beginning of my baking. I’ve baked since I was very young, in primary school, but the only two things I would make were simple butter cookies and nutella and oats cookies. Let’s not judge me when I say that almost every time I made those nutella and oats ones I would eat at least half of the batter raw… Once I ate all of the batter raw, that’s kind of wrong, but nobody was stopping me (my grandma once said that my stomach would hurt, but I just said “mhm” and continued eating) and it was so damn delicious. I can’t help if the raw batter tasted better than the actual baked cookies, right? Now I want to find the recipe and make it. Good plan.

Back to the story. So when I was in high school my mom randomly bought two baking books with recipes for me and it all went up from there (my mom would say it went down from there because of the infinite amount of dirty dishes she had to clean after me, oh do I miss those days haha… now I clean everything alone and I hate dirty dishes, but not even that can stop me from baking). I started baking almost every other day.
Getting a package of poppy seeds from a friend reminded me of the first recipe I made from those two books; this one. I decided to make some changes to the recipe and now I love it even more, this recipe makes a small batch so feel free to double the recipe.

Dough
Mix flour, baking powder, and salt then add butter and mix it with flour so that you get a crumbly mixture resembling bread crumbs. Now add the egg and sugar and form a dough that just holds together. If it’s not coming together add a teaspoon or tablespoon of cold water. Divide the dough into two parts and make balls out of it. Wrap them in a cling wrap and put one in the fridge and one in the freezer for half an hour. Meantime make the fillings.

Curd filling
In a bowl mix together eggs, sugar, milk, and cornstarch. Now add the cottage cheese, butter, and lemon juice and zest, mix until well combined. Beat the egg whites to stiff peaks and fold them into the cottage cheese filling.

Assemble
Preheat the oven to 180℃ and line a 23 x 23 cm baking pan with parchment paper (you can also grease and flour it). Take the dough from the fridge, roll out a 23 x 23 cm square and place it into the prepared pan. Put the poppy seed filling on top and on top of that put the cottage cheese filling and distribute evenly. Now take the dough from the freezer and grate it on top. Bake in the oven for 50-60 min, the top should be a golden brown color. Leave to cool completely before cutting. Dust with powdered sugar.
Enjoy 🙂 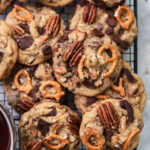 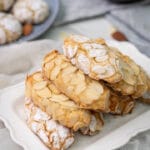 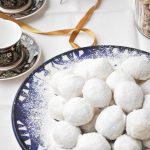 Slowly continuing with the pastry course from @kic

Well.. there are some healthy-ish desserts on my b

Slowly catching up with the pastry course from @ki

Ohhhh are you in for a treat 😍 The first recipe

Wait, are Holidays over? It went by so fast I didn

Happy New Year guys 🥳🥳💛 how did you celeb