This Cinnamon Roll Cheesecake is the best of both worlds of cinnamon rolls and creamy cheesecake. It’s made with sweet dough without yeast that gives a real cinnamon roll dough feeling, creamy tangy cheesecake, a cinnamon swirl filling and a cream cheese frosting for a good measure. Even better, it doesn’t need to be baked in a water bath!

I am a big big fan of cinnamon rolls and cheesecake. They each bring something special to the table and both are pretty simple if you think about it. They let their basic ingredients shine. In cinnamon rolls that would be cinnamon, butter and dough, and in the cheesecake that is cream cheese.

This cinnamon roll cheesecake brings these two classic desserts together in a one showstopping dessert. Maybe it looks complicated, but really anyone could make it! Even if it has some additional layers, it really is worth it to put a bit more effort into it. With the step-by-step process shots and detailed instructions, anyone can make this successfully, plus it doesn’t even require a water bath to bake!

This post is also available as a Web Story – Cinnamon Roll Cheesecake.

Honestly, I love the plain cheesecake so much, I don’t like to mix it much with anything else. I think I only have three other cheesecake recipes on the blog: apple crumble cheesecake bars with salted caramel sauce, no-bake mini cheesecakes with zabaione (now that one is so interesting, you’ve never seen anything like it), and my sugar-free protein cheesecake which really doesn’t count, right?
But I’ve been in love with this cinnamon roll cheesecake from the first time I heard about Cinnabon cinnamon swirl cheesecake in the cheesecake factory. I couldn’t get to that, but I found a similar Cinnamon Roll Cheesecake at SweetRecipeas so I decided I will just have to make it at home. Best decision ever!

What Cinnamon Roll Cheesecake is made of

To make this cinnamon roll cheesecake the best it could be, really resemble the cinnamon rolls and not just be a cinnamon cheesecake, it’s made with 4 different components that make it worth its name.

Now imagine the flavor and texture of these all together.. To die for!

Note that this cheesecake is on the sweeter side even though I reduced the sugar as much as I could.

How to make a Cinnamon Roll Cheesecake

There are no weird and out of the ordinary ingredients in this recipe. You will need just a few kitchen staples and lot’s of cream cheese.

The ingredients you need:

Now it’s just a matter of how we mix these ingredients together to make this magical creation!

There is nothing hard about making this dough, you just mix it together with a standard creaming method.
The only messy part is disturbing it across the bottom of the pan as it’s pretty sticky. To help yourself, grease your hands with some oil or butter and then press the dough around to distribute it all over the bottom of the pan. The layer will be very thin but it rises up during baking. If it makes it easier for you, you can also use a bit more on the bottom than on top. So you would use 2/3 of the dough on the bottom and 1/3 on top, just really get it all over the bottom!

Be sure to mix the cream cheese to a soft creamy texture to prevent any lumps. After adding the eggs, don’t mix too much, just enough to incorporate them in. Over-mixing at this point can trap too much air in the batter, which can cause the cheesecake to crack. So mix on low speed and add each egg after you incorporated the one before.

For this, just combine the melted butter with the sugar and cinnamon. I’m very tempted by the idea to brown the butter first but haven’t tried it yet. If you do give this a try please leave a comment telling me how it went!

When distributing the cinnamon filling on the cheesecake mixture be careful not to put it too close to the edges. Because the filling is mostly sugar, it could easily burn if it touches the side of the pan directly. After you used all the filling, take a toothpick or a knife and gently swirly it around the cheesecake filling.

Drop small spoonfuls of the remaining dough over the cheesecake. At this point you can swirl this around in the same way you did the cinnamon filling or let it be as it is.

Bake at 160 °C (320F) for about 60-70 minutes. Why there is such a big time difference is because ovens can be really tricky and different. Usually, ovens don’t run at a temperature they say there are, so it’s best to buy an oven thermometer. My cheesecake baked for 65 minutes. You know it will be done when the center is still slightly jiggly when you shake the pan.

Tips for baking the perfect no water-bath Cinnamon Roll Cheesecake

When it cools down you can pipe or spread the cream cheese frosting on top and it’s ready to serve!
If you are not ready to serve, store the cinnamon cheesecake in the fridge with or without frosting.

Impatient for having the cheesecake right away?

There are some people who are into warm cheesecakes and this is maybe the only one where maybe I would dare try that but really, cheesecakes are meant to be eaten at room temperature or chilled.

This one is definitely meant to be eaten at room temperature, not chilled, so if you really want to eat it asap, you can do so after it has cooled for 2 hours on the countertop (or even outside if it’s cold).

How do I know my Cheesecake is done?

The best way to test if your cheesecake is done is to open the oven and shake the pan (with oven mitts of course). There should be a slight jiggle in the center! The outside of the cheesecake will look pretty set but the center will jiggle around when shaking the pan.
If there is no jiggle at all, your cheesecake is over-baked.

How long does the Cheesecake last?

How to store Cheesecake?

If you are not freezing it, always store the cheesecake in the fridge.
You can store it whole in the pan, with or without the spring-form ring, covered with aluminum foil or cling film. Or if you only have a few pieces left, I like to store them in an air-tight container (in the fridge).

How to freeze Cheesecake?

Before making this recipe please read through it first to make the process smoother and to get answers to some questions you might have.

When you make this recipe take a photo and tag me on Instagram (@freakyblond), send it to my email, or attach the photo to the pin. In any case, I’d love to see it, it makes my day! I’d also love if you rate the recipe and tell me your experience in the comments so I can possibly make the recipe even better for you 🙂. 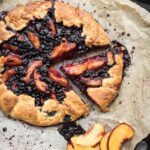 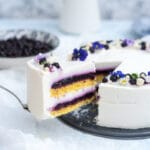 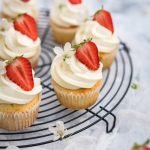 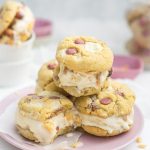